The universal accessibility of Internet publishing and social media has created a new class of public figures called “micro-influencers.”

And in the process, it's made the concept of celebrity sponsorships attainable for even the smallest niche brands.

You may not be able to get Paris Hilton to vouch for your product, but there are tons of influencers on Youtube and Instagram, with hundreds of thousands of followers, that you can team up with.

But how do you actually go about selecting micro-influencers for sponsorships?

While the cost is attainable for small businesses and startups, it's not free.

So you want to spend your budget wisely by choosing the right people with the right audiences.

In a recent blog post, Convince & Convert talks about five key factors you need to consider.

What to Look for in a Micro-Influencer

Before you can start an influencer marketing campaign, you need to establish what your goals are.

Do you simply want to raise brand awareness? To get more traffic to your business blog?

Do you want influencers to help promote a product so as to drive more sales?

Once you’ve established these goals, you can start looking into what micro-influencers you can use.

When researching influencers (in general, not necessarily just in the case of micro-influencers), these are the main things that you need to look into.

What niche would you put them into? What sorts of subjects do they cover and talk about the most?

What is their area of expertise, if any?

While an influencer’s number of followers definitely has some bearing, it’s much more important to look into the amount of engagement they receive, as well as give.

Check to see how often people engage with these influencers, as well as the engagement and response rates of the influencers themselves.

The more they engage, and the more genuine the engagement, the better.

This is one of the big benefits of using micro-influencers.

Because they don’t have as many followers, they can afford to interact more with them.

You can use this Twitter Report Card to not only get a quick snapshot of any account, including their followers and engagement, but you can also compare several accounts at the same time. 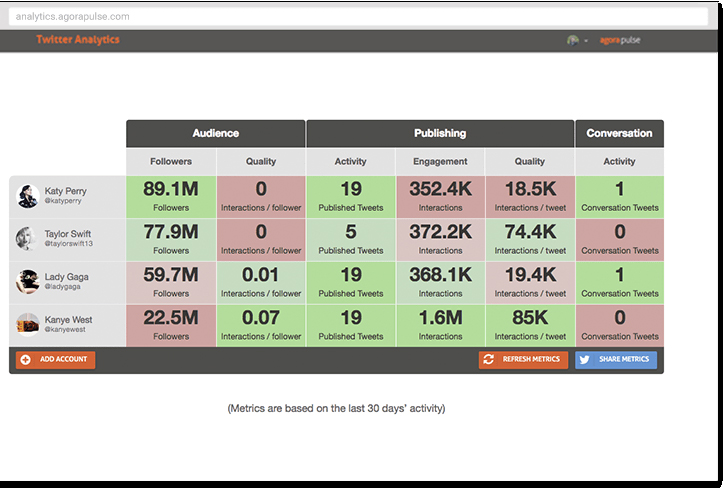 Who forms their audience? Do you share a similar target audience?

Is their audience in the same location you’re operating in (where applicable)?

When using influencers, the end goal should be to reach more of your target audience, so that you can raise awareness of your brand and make more conversions.

Because of this, if an influencer doesn’t share a similar target audience, then they won’t help much in achieving your ultimate goals.

For example, if I were to use to use influencer outreach to promote a digital marketing business to entrepreneurs, I wouldn’t get much value from using an influencer whose target audience is formed by corporations.

Even though they might cover the same subjects, they are targeting a different audience.

Most likely, I won’t get many inquiries from my target audience based on this promotion.

You need to look beyond the subjects they usually cover and the niche they are in to make sure you have a very similar target audience.

What kinds of links, tools, apps, and so on are they sharing with their audiences?

If, for example, your goal from influencer marketing is to raise traffic to your website, then you should look into the types of links they tend to share to get an idea of what types of content they prefer.

How authentic is the influencer?

People tend to be much more trusting of those who are authentic and have an organic approach to promotion.

If an influencer is very aggressive in the way they’re pushing a product or a brand, more often than not, this will put off their followers.

This could even impact the advertised brand negatively.

Although he does actively promote his blog posts, he also shares other information that might be relevant to his audience, he live tweets from the events he attends, and, in turn, he always receives likes and retweets from his followers.

If you take a look at his “Tweets & Replies,” he also takes the time to engage with other users and respond to any of their questions.

You can read more about pinpointing the right partnerships with influencers in the full article from Convince & Convert.