These determine who will, or will not, actually see your posts.

As you probably know already, just because you have a certain number of followers, it doesn't mean every single one of those people will see any given post.

The algorithms are proprietary, but that doesn't mean nothing is known about them — quite the contrary.

During the recent 2017 Facebook F8 Summit, Adam Mosseri, Facebook's VP of News Feed, broke down how the algorithm ranks content.

It turns out that it works in a series of steps, each of which is something you can optimize for, at least to an extent.

This information from the F8 Summit can be leveraged to help you maximize the likelihood that a significant number of people will see your posts.

Social Media Examiner breaks it down step by step.

When you first open your news feed, Facebook’s algorithm takes an inventory by looking at all of the stories posted by your friends and the pages you follow (in the same way Adam checked to see what was on the menu).

Facebook then considers all available data and tries to make an informed decision about how interested you may be in a certain story. Facebook calls this data “Signals”. There are hundreds of thousands of them that Facebook considers to rank your content, such as who posted a story, what phone a user is on, what time it is right now, how much bandwidth you have, and so on. (More on these signals below.)

Facebook then uses these signals to help make predictions and calculate the probability of certain outcomes; for example, how likely you are to comment on a story, share a story, spend time reading a story, and so forth.

Facebook looks at a variety of signals to rank content and determine what to show in the news feed.

After making these predictions and calculating the probabilities, Facebook consolidates the information to calculate a “relevance score,” a number that represents how interested Facebook thinks you may be in a certain story. It’s worth noting that Adam made a point of stressing that Facebook doesn’t really know how interested you are in a certain story; it’s an educated guess at best.

This ranking process occurs each and every time you open Facebook, and ultimately determines what your feed looks like.

Facebook calculates a relevance score based on a variety of factors, which ultimately determines what users see in the Facebook news feed.

Some of the specific signals that will affect your ranking on Facebook include:

Who posted a story 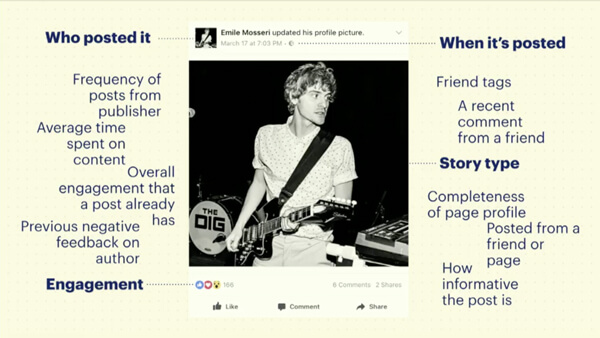 When the story was posted

To read more about Facebook's algorithms, and how you can optimize for them, check out the full post on Social Media Examiner.