A growing follower count on social media is usually something you think of as a good thing.

Maybe even a great thing.

This is especially true when your business and your account is new.

Your follower count is a form of social proof, and the bigger it gets, the faster its rate of growth will become.

But are those followers actually interacting with your brand?

What matters isn't the number itself — it's the amount and depth of engagement you get relative to the size of your following.

If you've got tons of followers, but your posts aren't getting any action, it's possible that some of them might not even be real people.

This is true on other platforms, but Twitter in particular has a massive bot problem.

There are tons of “users” out there who aren't even a person, just software that uses algorithms to perform certain actions like following people.

Bots don't buy things from you.

Fake accounts might fluff out the number of followers you have at first glance, but they're useless when it comes to actually making money as a result of your social media efforts.

There are also probably followers who are real people, but just aren't engaged with your brand, or don't quite fit into your target audience.

Following someone's Twitter is as easy as a simple tap or click, and we often follow accounts that it turns out aren't that interesting after all.

In a recent blog post, Razor Social explains how to start trimming down your Twitter following in ways that promote better engagement rates — and ultimately, a better ROI.

The more followers you have and the more influential you are on Twitter, you’re going to be targeted by more fake/bot accounts.

No matter how careful you are about auditing your account and keeping it ‘bot free’ you’re always going to have a few bots that follow you. And this isn’t something you should worry about.

But if a large percentage of your followers are bots…then you should be worried!

So how do you find out how many fake followers you have?

There are useful tools out there that you can use to audit your Twitter account and get the numbers on fake followers.

You can use TwitterAudit to get an estimate on how many bots are following you. It lets you audit your account once for free, but you’ll have to upgrade to one of their Pro plans to re-audit or to use to tool to remove fake followers. Pricing starts at $4.99/month for analyzing up to 10K followers.

Here are the results of my first audit:

TwitterAudit determines whether a user is fake or not based on a set of criteria, including the number of tweets, date of the last tweet, followers/friends ratio. Their system is not perfect, but it will give you a general idea of how many of your followers are fake.

2. Remove followers who are not interacting

Inactive followers or those who never interact with your updates are not necessarily fake accounts, but they still have little value to you.

It’s easy to find, unfollow, and block inactive accounts with a tool like Untweeps. This tool is quite straightforward and easy to use since it’s built specifically for unfollowing Twitter users who haven’t been active for a period of time.

But what about inactive followers that you’re not following? How do you find and remove them?

There’s a great tool called Audiense that can help you with this. You can use Audiense to analyze your Twitter followers and find those that haven’t been active in a while.

The tool features a set of filters that help you refine your search and identify inactive users within your community. 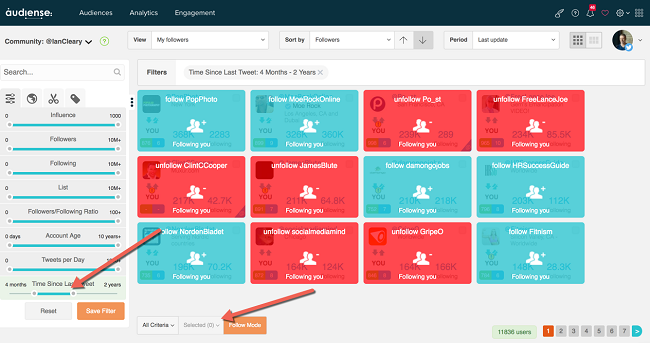 As you can see from the image above, you can set the time period since the last tweet and Audiense will show your inactive followers with an option to unfollow them.

You can find more ways to tailor your Twitter following toward better engagement in the full blog post from Razor Social.