It's easy to make mistakes when you're new to digital marketing.

Even if you have a marketing degree, digital changes so fast that there's a lot that they don't teach you in school.

There's still an initial learning curve, though you're ahead of the game if you're already educated about marketing theory and general principles.

Speaking of things that change so fast it's hard to even keep up, we need to talk about SEO.

In just a few years, the search marketing landscape has changed dramatically.

And these days, for better or for worse, SEO seems to be getting less and less effective.

You can't just spam and hack your way to the top of the SERPs anymore, but it's more than that.

Even when it comes to regular, respectable white hat search engine optimization, it just doesn't drive the traffic that it used to.

Part of it is that Google is making the ads more and more prominent, gradually pushing the organic results further and further beneath the fold.

Part of it is that search itself is changing.

With devices like Alexa and Google Home, as well as voice search in general, typing things into Google isn't always as necessary as it used to be.

In a recent blog post, Nichehacks talks about the hard truth of SEO in 2017.

You Still Depend on Google for Traffic

Ever since the first Google Panda update in 2010, Google has been making regular changes to its search engine algorithms.

This has made search engines the least reliable source of traffic.

You never know when the next algorithm arrives and ruins all your hard work.

Most of the back links, created with keyword rich anchor texts in the pre-Panda era, backfired and damaged the rankings of millions of websites around the web.

Blogs, full of keyword rich articles written for Google, were the biggest casualty.

In short, almost everything, that was considered good for SEO, turned bad.

You, however, still depend heavily on search engine traffic and have not developed any meaningful alternate traffic sources.

You still invest heavily in SEO and back linking, and almost all of your content is based around keywords only.

You still take advice from SEO gurus who claim to have located loopholes in Google algorithms to open floodgates of traffic to their websites.

It doesn’t work anymore, but you won’t listen.

Here's what your Google Analytics traffic source should look like… 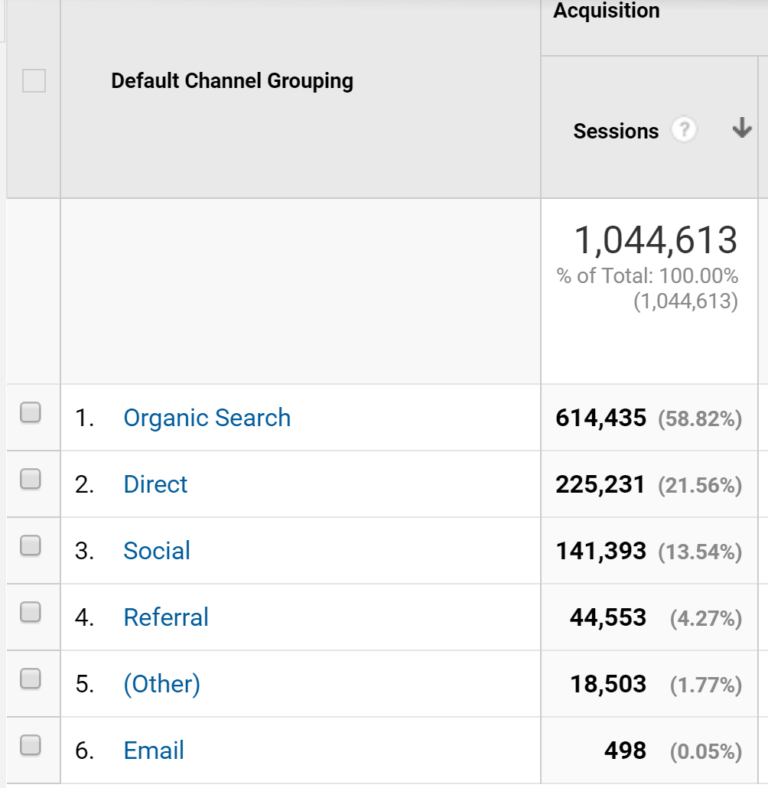 A varied range of traffic sources

It should have a wide range of traffic sources so that if your Google traffic dries up due to an algorithm update or loss of rankings, you're still in business.

You can read about more common marketing mistakes in the full blog post from Nichehacks.