You're already well aware that conversion rate optimization is crucial for your business's success.

You're probably running tons of A/B tests on lower performing pages, and you may even have transformed some of your least successful pages into some of your biggest sources of sales.

But that's the thing: when people A/B test for CRO, they tend to focus on web pages that aren't performing particularly well.

But believe it or not, if you ignore your high-performing pages, you could actually be missing out on some huge opportunities to boost your sales.

Even if a page is doing great, there's still a chance that there might be some room for improvement.

While it's true that “perfect stands in the way of good,” and that you shouldn't get too obsessed with perfection, high performing pages can still benefit from A/B testing and other CRO strategies.

In a recent blog post from Moz, the author explains why.

You don’t experiment on pages or campaigns that are already doing well.

Just because something is doing well doesn’t mean you should just leave it be. Often, it’s these marketing assets that have the highest potential to perform even better when optimized. Some of our biggest CRO wins here at HubSpot have come from assets that were already performing well.

I’ll give you two examples.

But this didn’t mean updating just any old blog posts; it meant updating the blog posts that were already the most influential in generating traffic and leads. In her attribution analysis, Pam made two surprising discoveries:

Why? Because these were the blog posts that had slowly built up search authority and were ranking on search engines like Google. They were generating a ton of organic traffic month after month after month.

The goal of the project, then, was to figure out: a) how to get more leads from our high-traffic but low-converting blog posts; and b) how to get more traffic to our high-converting posts. By optimizing these already high-performing posts for traffic and conversions, we more than doubled the number of monthly leads generated by the old posts we've optimized. 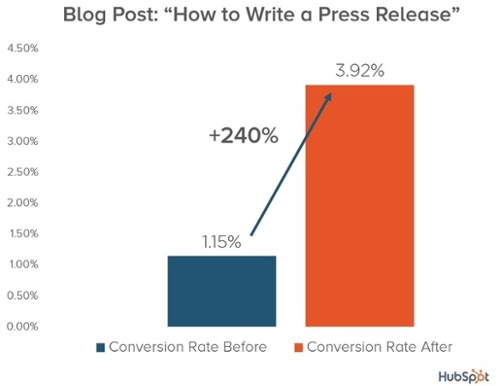 Another example? In the last few weeks, Nick Barrasso from our marketing acquisition team did a leads audit of our blog. He discovered that some of our best-performing blog posts for traffic were actually leading readers to some of our worst-performing offers.

To give a lead conversion lift to 50 of these high-traffic, low-converting posts, Nick conducted a test in which he replaced each post’s primary call-to-action with a call-to-action leading visitors to an offer that was most tightly aligned with the post’s topic and had the highest submission rate. After one week, these posts generated 100% more leads than average.

The bottom line is this: Don’t focus solely on optimizing marketing assets that need the most work. Many times, you’ll find that the lowest-hanging fruit are pages that are already performing well for traffic and/or leads and, when optimized even further, can result in much bigger lifts.

You can read more about CRO over at the Moz Blog.