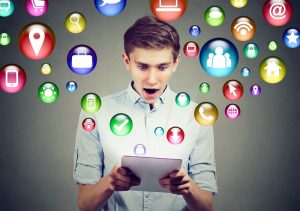 Social Media is constantly changing, and at times it may seem challenging to keep up with it all. As a business owner, it may be hard to juggle the social media channels. And if it’s hard to interact with customers on social media there likely isn’t a ton of time to learn more about each channel. That’s why it may be useful to learn about some of the most shocking statistics about social media. Here are seven that might make business owners and entrepreneurs rethink the way they’re approaching social media.

Who would have thought that fake news would be more popular than real news, but with how things are today on the web, it’s not surprising that’s the case. Quertime says that it’s a serious problem that any company should consider. So what can you do to make sure your content isn’t considered “fake”? Well, it’s okay to come up with compelling titles but make sure the content you write is not fake and comes from reputable websites.

Currently, the most popular social media website is Facebook. Almost everyone you know has a Facebook account. You find all sorts of news and info on Facebook but what’s troubling is that there is a large quantity of fake news out there.

Earlier this year, investigations by BuzzFeed revealed that 20-40% of news stories on Facebook could be fake. There are groups of people who create news stories and spread them in the hopes that they become viral and they can profit from ad revenue. The more controversial the news, the more chances it has of going viral.

44% of adults get all their news from social media. It is such a powerful tool that fake news stories have been shown to have influenced the recent US elections. Mike Caulfield, from Washington State University, carried out research that showed that fake news articles gained thousands of more shares than real ones. Safe to say this is a problem now.

Did you know that moms are the biggest supporters of branding on Facebook? If you haven’t been supporting mommy bloggers or made an effort to learn more about their likes and dislikes, this may be something worth doing, according to The Content Factory.

If your brand isn’t tapping into the mommy market, you’re missing out. Keep this crazy statistic in mind: when they aren’t tagging you in embarrassing childhood photos or questioning your relationship status, Facebook-friendly moms are liking brands more than any other group. (Mashable)

Another crazy thing about Facebook is that according to Content Factory, over 130 million Facebook users could be fake. That’s a lot of people who may not be genuine customers, so keep that in mind when looking and monitoring analytics.

The site has 1.23 billion monthly active users (MAUs), which means between 67.65 million and 137.76 million accounts are either duplicates or straight up fake. Something to keep in mind when measuring your social media marketing ROI — focus on engagement and traffic, not just follower counts.

Neil Patel cites Search Engine Journal which says that email marketing has an ROI of 4,300%. Based on what is discussed below, it’s safe to say that spending more time and money on email marketing than on social media marketing is a smart thing to do.

What? A statistic about email? You thought this was about social media, right?

My title is “Five Shocking Facts That Will Change Your Entire Approach to Social Media.” This statistic qualifies as shocking, and it impacts the way we approach on social media.

The basic fact is this: Email marketing has a huge ROI — way better than any social media marketing ROI can ever dream of achieving. Compare 4,300% that with the ROI of social media, which is crawling around on the floor. Is there even a comparison?

Take a look at this chart, released by Custora in 2013. They surveyed the owners of ecommerce sites to find out where these sites got their customers. Here are the top six sources: 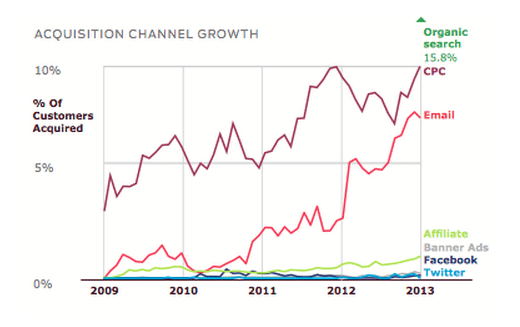 According to the chart above, the fascinating thing about email marketing is that its acquisition rates are rising dramatically. It has quadrupled over the past four years. Email marketing’s effectiveness far outranks any social media platform, and its growth outstrips them.

Even the customer lifetime value (CLV) of social media is hardly worth a second glance. Again, email marketing crushes social media by a huge margin:

Even though Pinterest has a high bounce rate doesn’t mean you shouldn’t utilize it to advertise and promote your business. Since Neil Patel (who cites Fast Company as a resource) mentions that Pinterest is the second biggest social media site, there’s no doubt that it offers many benefits. However, seeing results on Pinterest takes patience. See why:

The first disclaimer is this — Pinterest has high bounce rate (53%) and low engagement. Disclaimer number two: Pinterest doesn’t work for everyone. If you are into food, crafts, photography, weddings, design, fitness, humor, travel, fashion, and inspirational quotes, then Pinterest is killer. It holds promise for some, but not for all.

Now, let’s talk about ROI. Pinterest, as it turns out, does have one. But it’s a delayed reaction. When a pinner curates his or her pinboard, it takes a while for there to be social buildup, let alone revenue. Unlike Twitter, which has a short half-life, Pinterest visits increase as time goes on. It’s like wine. The older, the better.

As it turns out, the revenue doesn’t start happening until more than two months after pinning. Pinners spend more time exploring other people’s pinboards then they do searching for stuff offsite to pin. The average Pinterest pin gets 10 repins, but it takes time for those pinners to start repinning pins. This leads to a corresponding delay in revenue.

Pinterest is money, but it’s slow money. It’s like investing in a CD or a bond. The egg just takes a little while to hatch.

Who knew that YouTube could be so useful for advertising products and engaging with customers?! Well, it turns out YouTube might be worth your time. See why Buffer believes YouTube is worth the time and effort.

Did you think TV was the best way to reach the masses? Well if you’re after 18–34 year olds in the U.S., you’ll have more luck reaching them through YouTube. Of course, one video won’t necessarily reach more viewers than a cable network could, but utilizing a platform with such a wide user base makes a lot of sense.

Rethink it: If you’ve been putting off adding video to your strategy, now’s the time to give it a go. You could start small with simple five minutes videos explaining what your company does or introducing your team.

Buffer also reveals a pretty shocking statistic about Twitter, and it’s likely you had no idea the audience was in this age group! This just goes to show how important it is to know your audience and know who you are marketing to on any social media channel.

Rethink it: Keep older users in mind when using social media, particularly on these three platforms. Our age makes a difference to our taste and interests, so if you’re focusing on younger users with the content you post, you could be missing an important demographic.

Quertime discusses a few more shocking findings of social media channels. For example, who would have thought that younger people feel Instagram is more important than Facebook and Twitter?! It’s good to know that Instagram users are younger. Also, keep reading to find out whether there are more women than men on social media or if it's an even split.