No longer at the mercy of someone else's broadcast schedule, we were free to watch just about anything we wanted on demand.

But lately, live video's been making a comeback.

Consumers' love of live streaming has attracted some seemingly unlikely players, including Duncan Donuts and Chevrolet.

These aren't really companies whose names you'd associate with entertaining video content, but their marketing departments have managed to generate some buzz.

Providing behind-the-scenes footage is a great way to showcase the human side of your brand and build rapport with your audience.

If you’re a fan of the delicious snacks that Dunkin’ Donuts manufactures, it makes sense you’d be interested in the production process used to create them.

In February 2016, Dunkin’ Donuts hosted a live tour of its facilities, including a test kitchen which is used for staff training purposes.

The video also includes interviews with staff experts who provide unique insights into the brand’s most popular products – such as the visually appealing Iced Macchiato.

The highlight of the video was undoubtedly the donut factory.

A staff member explains the process for laying out the dough, cutting the right shapes out, frying it, decorating it and creating donut cakes.

While interviewing the donut expert, it’s revealed that he has been working at the company for 41 years. This subtly conveys that Dunkin’ Donuts is a company that values its employees, which makes it appear more trustworthy to consumers.

Even if your facilities don’t include an awesome donut factory, you can still use live video to authentically showcase your staff and workplace in order to build rapport with your audience.

In order to create a buying frenzy for the launch of the all-electric 2017 Bolt EV, Chevrolet used Facebook Live to stream a video from the consumer electronics tradeshow, CES 2016.

The Chevrolet spokesperson emphasizes how societal trends like sustainability and urbanization have led to an increased consumer demand for electric cars.

By providing context around this emerging technology, it demonstrates that electric cars are valid and necessary for the future.

Not so long ago electric cars were viewed contemptuously, so there are still some fears to alleviate in terms of how well the vehicles can actually function.

Videos like these provide a platform for the worldwide tribe of Chevrolet owners to discuss their favorite vehicles. 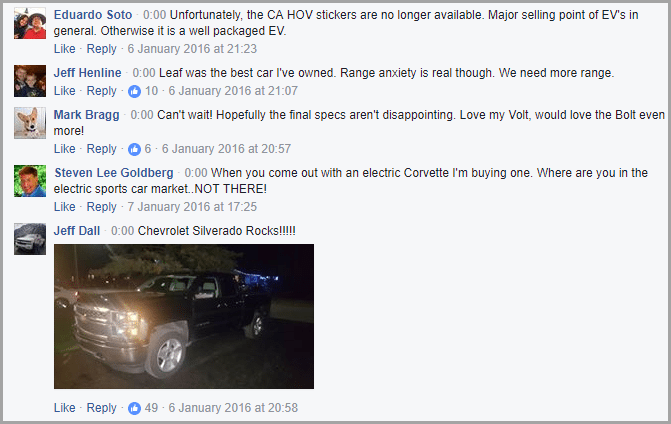 In this regard, live video isn’t just an opportunity to promote your brand – it also enables you to bring your audience together and make them feel a part of something greater than themselves.

This is a winning strategy for longevity in your business.

You can learn more about using live video for content marketing over at Jeff Bullas's blog.